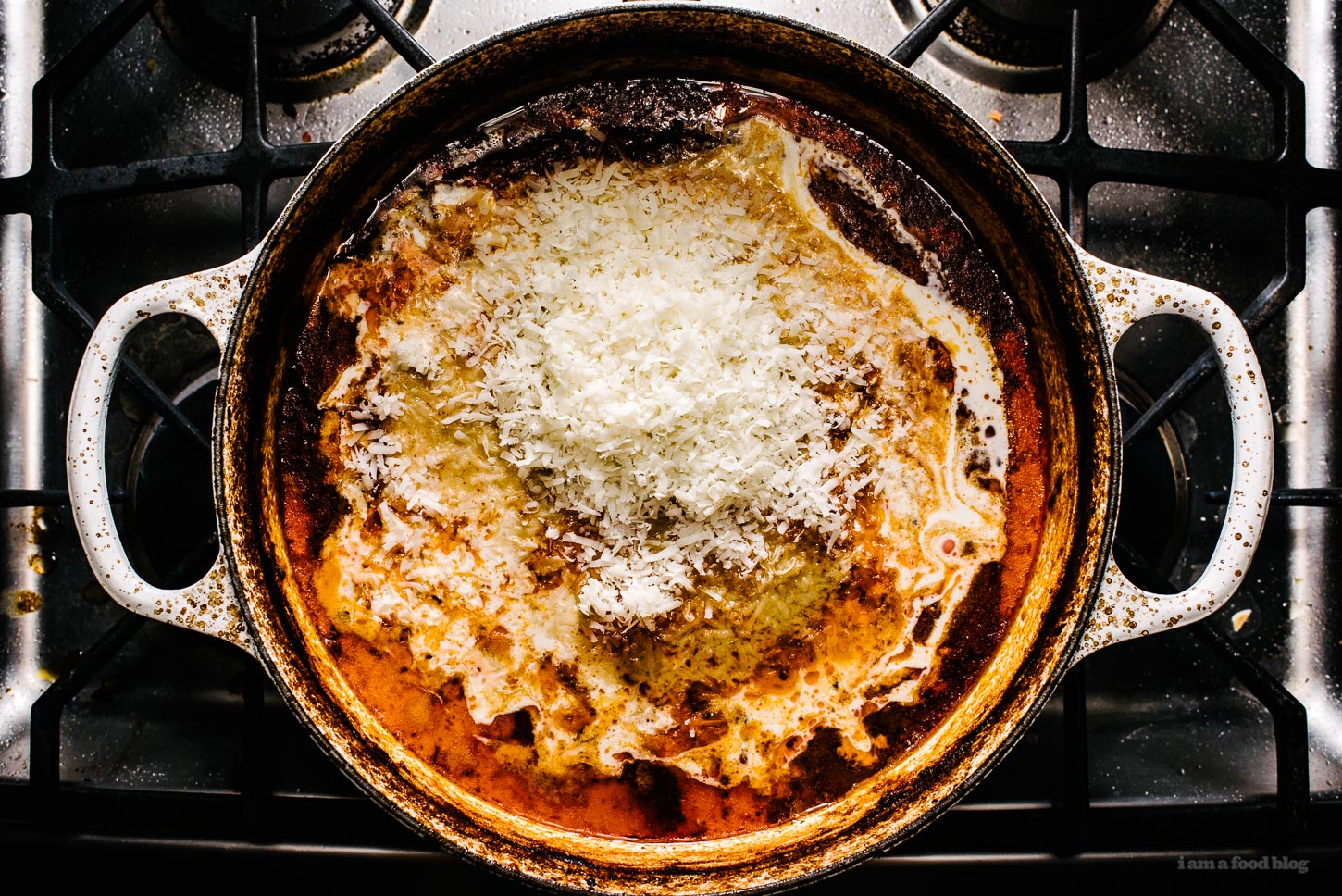 Adjust your oven racks (lower-middle position) so that a large dutch oven fits on the rack. Preheat the 300°F.

Place the stock in a bowl and sprinkle with the gelatin and set aside. Puree the tomatoes with a blender or immersion blender until smooth. Set aside.

Use the blender/immersion blender to blend the chicken livers until smooth. Set aside.

Over high heat, heat the olive oil in a large dutch until hot and shimmery. Add the beef, pork, and lamb, and cook, breaking up with a wooden spoon or potato masher, until no longer pink, but not browned, about 10 minutes. Remove from the heat and stir in the blended chicken livers.

In another pan or skilled, melt the butter over medium high heat. Add the pancetta and cook, stirring often, until the fat renders out of the pancetta, but it is not yet brown, about 8 minutes. Stir in the onion, carrots, celery, garlic, sage, and half of the parsley. Cook, stirring, until the vegetables are soft, but not brown, about 8 minutes. Stir the cooked vegetables into the dutch oven with the meat.

Cook the meat and vegetable mixture over high heat, stirring, until most of the liquid evaporates, about 10 minutes. Add the wine and deglaze the pan, stirring, until the wine is mostly evaporated. Add the gelatinized stock, tomatoes, milk, and bay leaves. Season gently with salt and freshly ground pepper.

Bring to a gentle simmer and place in the oven, uncovered, and cook, stirring occasionally, until the liquid is almost completely reduced and sauce is thick under a heavy layer of fat, about 3-4 hours. If the sauce is still thin after 3-4 hours, transfer to the stovetop and bring to a brisk simmer over medium high heat, stirring frequently.

Skim off most of the fat, leaving about 1 cup behind, then stir in the cream, parmesan, fish sauce, and remaining parsley. Taste and season with salt and freshly ground pepper. Enjoy with your favorite pasta!

Your email address will not be published. Required fields are marked *